The Next Big Thing?

It’s early in this blog to take a side trip, but I have been invited to participate in a global blog tour called “The Next Big Thing?” Tee-hee! I gave myself just enough latitude when I defined this blog’s purpose in a way that allows me to consider the use of language as well as its misuse.
So not to toot my own horn (or, rather, to stand on a rooftop and give it a great big blast), the language used in this case is my own, and for me it is a VERY big “next big thing.”
After being tagged by a fellow author or illustrator, each participant in the tour posts the answers to ten questions about their new (or next) book, and then tags two to five people in turn.
Before I answered the questions, though, I wanted to know more about when and how this game of tag began. Finding the answer took a while (and led me briefly down a false trail), but the very first “The Next Big Thing” post seems to have originated in the blog of Hawaiian writer Toby Neal in June of 2012. 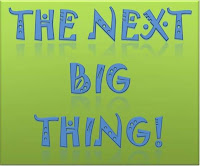 A few entries later, this little green banner began to float alongside the posts before it disappeared again. An earlier participant suggests that writer Sheila Deeth created it, although she didn't use it in her own blog post. Let’s see how long it hangs on, this time!


Big thank-yous to Toby Neal for starting the tour (brilliant idea!), and to my friend and colleague Lizann Flatt for tagging me last week. Go read her books!

And now I’ll answer the ten questions, and tag more authors at the end. 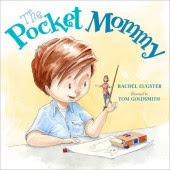 (1) What is the working title of your book?
The Pocket Mommy

(2) Where did the idea come from for the book?
It was inspired by something my younger son Samuel said. He had a very hard time letting me go when I dropped him off at kindergarten. One day, he said (though a little more elaborately): “Mommy, I hate it when you leave me at school. I wish you were the tiniest mommy in the world, so I could keep you in my pocket all day.”
In that very instant, I knew there was a book that would begin right there.

(3) In what genre does your book fall?
It’s a children’s picture book. Is there a fantasy sub-genre within picture-book fiction?

(4) What actors would you choose to play the part of your characters in a movie rendition?
I’d love to cast a young Lily Tomlin as the Mommy/Pocket Mommy character. (Thanks to my taggee Kate Jaimet for the suggestion!) Maybe even better: Claire Danes, with a dash of Robin Williams. Or Sandra Oh. It requires an actor who can project warmth and comfort, but also zip and a certain nutty edge.
For the character of Samuel, we’ll need an open casting call. We’ll be seeking a child who looks sweet and trusting (big blue eyes are a plus), but who can also put his foot down when necessary.
The real conundrum will be how to cast the guinea pig.

(5) What is the one-sentence synopsis of your book?
Perhaps it’s best summed up by the two sentences that will appear inside the book jacket:
Samuel wishes for a tiny mommy who can fit into his pocket and spend the day with him at school. When he gets his wish, things don’t go as planned. . . .

(6) Who is publishing your book?
Tundra Books, Canada’s oldest publisher of children’s books (now a division of Random House)

(7) How long did it take you to write the first draft of the manuscript?
That depends on how one defines “first draft”! Some day, I will give a talk in which I compare what I first got down onto paper with what is actually being published.
I started sketching out the story in 1996. If you put all the days in which I found time to work on it end to end, it might not span more than a year or two. But there’s no question it’s been a long road. The manuscript was accepted in 2009. I signed the contract in 2011—and emailed my colleagues on the SCBWI Canada listserv to tell them that the weekend after driving my son off to his first year as a university undergraduate, I signed a contract to publish a book inspired by something he said in kindergarten.
The book will be released this fall (2013).
To say that this business moves glacially is to assign it inordinate speed!

(8) What other books would you compare this story to within your genre?
This is a really tough question, because there are books in other children’s genres that it resembles more closely than the picture books I can think of.
It shares a little genetic material with any picture book that weaves a fantastical element into an otherwise realistically portrayed child’s world. So maybe something like Jan Brett’s The Mitten would be a distant cousin. Or Amy Schwartz’s Bea and Mr. Jones, with which it shares a kindergarten setting. Another real-world-with-a-twist sort of tale is Perfect the Pig by Susan Jeschke. Or Eloise by Kay Thompson.
There are a lot of books that focus matter-of-factly on the interaction between the child and a fantasy element, like Harold and the Purple Crayon by Crockett Johnson, Robert Munch’s A Promise is a Promise, or (dare I say so?) Maurice Sendak’s Where the Wild Things Are.
My hope is it will offer comfort similar to what can be found in Mama, Do You Love Me? by Barbara M. Joosse, or Grandfather Twilight by Barbara Berger, or Goodnight Moon by Margaret Wise Brown.
And a couple of turns of phrase crept in that I came to think of as secret tributes to A.A. Milne.
But it differs from any of these books by at least as much as it resembles them!

(9) Who or what inspired you to write this book?
See question number two. ;)
Lots of kids have a hard time with being dropped off—including my older son, for whom I made a “mommy doll” out of a sock, with blue button eyes and red yarn hair. Knowing what a universal tug this is for both parent and child certainly inspired me to write the story.

(10) What else about the book might pique the reader's interest?
The wonderful art by Tom Goldsmith, of course. Go check out the energy, the humour, and the sheer virtuosity of his drawings. It was really exciting to watch him bring my story to life.
Finally, there is the sentence that closes Tundra’s description of the book, which was contributed by my brilliant editor, Samantha Swenson. If this doesn’t make you want to read the book (and buy it for every small child you know), I don’t know what will.
An energetic romp with a sweet core, The Pocket Mommy follows one little boy as he navigates the age-old conflict between the comfort of the familiar and the joy of letting go.

Let's face it, it's sporadic!